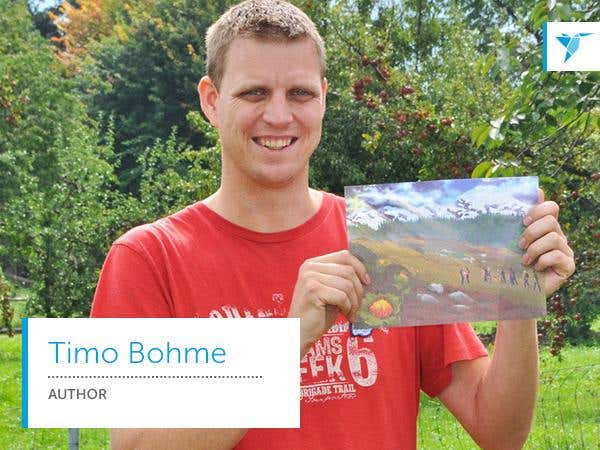 Timo Böhme had an emotional and vivid dream about the future and today’s fast-paced world. Inspired by its futuristic details and the idea that we may soon make that a reality, Timo turned it into a story and eventually an ebook. The images in his dream were so clear and precise that he started illustrating them to include in the book.

After several attempts at sketching, he gave up and thought that it was better to entrust the challenging task to the hands of a capable painter. Timo asked friends and colleagues if they knew someone who was up for it. Eventually, he found a fair few, but their rates were at par to the standards of local artists in Switzerland. Unfortunately, Timo didn’t have that much money to spare for his creative project.

“I don’t have the time and the funds to push with publication so for now, it’s going to be a keepsake. For that purpose, hiring local painters is not very cost-friendly,” he said.

He thought of giving it up altogether. His story was finished, and that was more important. However, the images lingered in his head, and most nights he stayed up thinking about them. The landscapes were gorgeous, and although the story was set decades in the future, nature was bountiful. With the constant improvement of technology and industrialization, he thought the future would look different from the lush mountains and thick mangroves in his mind’s eye. The images wanted to be out on canvas and Timo had no choice but to continue the search.

One busy day at work, he heard someone mention the word “outsource” and memories of his stint at vWorker, which merged recently with Freelancer.com, came rushing. Immediately, he logged into the site and posted a project.

Soon after, he found two quality workers. He decided to settle for the one who asked a lot of questions. “If the freelancer is inquisitive, I feel like he’s going to take the job seriously.”

He gave the project a duration of three months, and the results turned out terrific. The freelancer managed to finish in under a month, and was able to paint his dreams perfectly. “I didn’t think I could find a painter so willing to paint my dream. He understood what I wanted from the get-go and even called it a challenge to paint exactly what was in my head. The price is amazing for his time.”

Find someone on Freelancer.com to help you get things done. Post a project now!

Understanding the cause of stress makes it easier to manage. Let's dive into why freelancers experience stress on the job and how they can handle it.

Occasionally a fraudulent client or scammer will post a project, causing trouble for freelancers. Find out how you can spot the early warning signs.