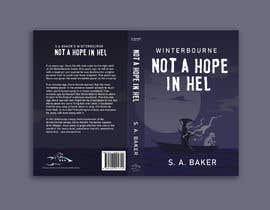 You are to create a print and ebook cover for the book "Not a Hope in Hel" (yes, HEL, not HELL). This is an urban fantasy with humour, so the cover must show such. Please follow the instructions carefully, for deviation from them will disqualify your submission.

You will see a PDF attached. Download it and use it for your template. It is the size of the book in print form. All covers are to be wrap-around, meaning the image must from one edge to edge. The front cover should also look good by itself for it will be used in the ePub version of the book.

Here is the back blurb for the book:
(start of back blurb)

Five minutes ago, Davis Mareth learned that the most incredible power in the universe doesn't amount to much when you're locked away in a frozen wasteland. Five minutes ago, he learned that Winterbourne Home is about to burn in the fires of a glorious revolution. Five minutes ago, Davis learned Hell might not be a bad place to live, but Hel is about the worst thing he's ever seen. If he doesn't find the way, easy or hard, short or long, that leads up from Hell...or is it Hel? Everything he knows, and everyone he loves, will burn along with it.

In this deliciously creepy third installment of the Winterbourne series, Davis Mareth, the barely capable Grim Reaper, must come to grips with his new role in the world of the newly dead, sometimes horrific, sometimes hysterical … and always final.
(end of back blurb)

The main character took over the position of Death, and due to a clerical error, is outcast to an alternate plane of existence called HEL. While he is away, the necrosites that usher the soles to the afterlife are revolting (necrosites are hairless ape-type creatures - see reference in the show Dead Like Me).

The cover must convey the comedy in the work as well as the urban fantasy and slight horror of it. It must also adhere to Amazon guidelines for advertising.

To submit your work, please supply both the full a flat image of the full cover and from cover. All work must be 300 DPI and follow the guidelines laid out in the attached PDF. You will supply a photoshop file of the cover if picked with all layers showing in case modification is needed.

Be creative. the cover will need to have an image of the Grim Reaper and a necrosite and convey the humour of the book.

Book Title: NO A HOPE IN HEL
Series: WINTERBOURNE
Author: S. A. BAKER

Note: Do not message me asking for the job, you are in a contest. Follow the instructions and do your best to get the gig.

Added - basic idea of a necrosite - only difference is the snout is more elongated.

Suggestion - Death and a necrosite playing chess? Just something to help you figure out a really good cover idea.

“He won the contest. Only one little change needed and that was done fast and with perfection.”