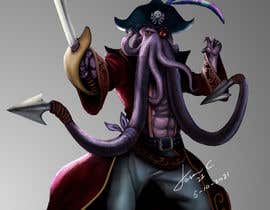 Slrrp, The Illithid Captain(s)
Slrrp is an Illithid Mindflayer. More specifically an Ulithid which has 6 “tentacles” instead of 4. The 2 extra are much longer (image 2 and 3). He thinks he’s a pirate captain and so he dresses that way. He also suffers from split-personality disorder due to the injury to his head and brain. His head should be soft/limp like an octopus (image in pdf), UNLIKE the hardened heads of normal Illithids. His main motivation is to finish writing his operatic musical life story.
The 2 long “tentacles” have tentacle extensions on them (blades), strapped with thin leather. (image 2) The long tentacles have no suckers.

Of the 4 shorter tentacles, one is chopped clean off (near the middle) and one of the others on the side is curled upwards permanently. The 4 shorter tentacles have suckers on them.
The head should be limp/floppy like an octopus head, unlike normal Illithid.
He wears a “glaregoggle” (image1) but only over 1 eye (like a pirate’s eyepatch).
On the hardened side of his head, he wears a pirate hat.
He also has a pirate captain’s coat – something regal and fancy with gold trim. Doesn’t have to be red, but if it is it’s dark red. (image 5)

His skin color options are purple or blue/grey - but want to avoid him looking like Dr. Zoidberg. Since octopus can change colors, he could technically have other colors on him, but wanting to avoid

He also bears a muscular chest half-way maybe one side of the coat is open? (Image 6). Most illithid are scrawny, bony or ill-looking. Slrrp wants to look great in the mirror.
Pose: can be any pose, but if looking for one specific, him “on guard” or at the ready with his extended tentacles while striking a “singing” pose would fit his character the best.
The purpose of Slrrp is to be the main villain of a Dungeons and Dragons campaign book. Getting the look of him right is key to the entire publishing effort.

Art Styles
As his description suggests, there are two “versions” of Slrrp. One is the serious, dangerous, and vicious Ulithid Pirate Captain. The other is a hilarious, whimsical performer who wants to sing and dance and make friends, but due to his anatomy can only screech the most uncomfortable noise ever heard. This is why finishing his musical has been so difficult. To represent Slrrp in each way, the art styles must be different and distinct. One is softer, cuddlier, and funny looking. The other is highly detailed, grotesque and horrifying. I’m only looking for one right now of course, you can choose which - though I'm hoping for something that encompasses the split personality somehow.

“Jason nailed a character design contest on his first try - then came back and took another try at it and nailed it again. He made it hard for us to choose between the two, and he worked very fast at it. It's hard to understate the talent here.”